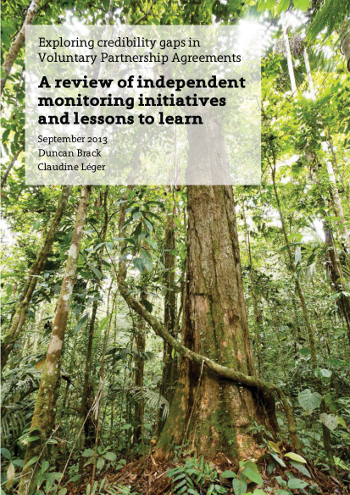 International schemes to protect forests are unlikely to succeed until they ensure that local civil society and communities are at the heart of forest monitoring, according to a new report published by twelve NGOs today.

Exploring credibility gaps in Voluntary Partnership Agreements: A review of independent forest monitoring initiatives and lessons to learn identifies several ways in which civil society and community participation could improve the effectiveness and reliability of these landmark agreements between the European Union and timber-producing developing countries. The deals set out to reduce the consumption in Europe of illegally harvested timber by improving forest laws, and their implementation, in tropical forests.

David Young, international forests advisor at Global Witness, said “Independent forest monitoring has been a feature of international efforts to improve forest governance and reduce illegal logging since the 1990s.This study shows how and why the people who can do most to protect forests at a local level do not have currently enough of a say, which is bad for them and for the forests. It’s essential reading for those designing, funding, supporting and implementing monitoring by local civil society groups and communities.”

The study summarises progress to date and the challenges monitors face in six countries where a Voluntary Partnership Agreement has been finalised, and two where agreements are being negotiated. The study provides the following key insights:

The study, by independent researchers, was commissioned by Global Witness, FERN, and ten forest monitoring groups from Cameroon, Central African Republic, the Democratic Republic of Congo, Gabon, Ghana, Indonesia, Liberia, and the Republic of Congo. In launching the report, lead author Duncan Brack concluded, “No system is fool proof, and once licensed-legal timber starts to enter the European market, it is essential that people have confidence in its legality. The overall conclusion of the study is clear: effective independent monitoring will be essential to the credibility of the Voluntary Partnership Agreements and the timber products they license as legal.”

Claudine Léger, author and translator of the study. Tel: +33 52483243; legerclaudine@gmail.com

Contact details for each of the commissioning NGOs are on the inside cover of the report.