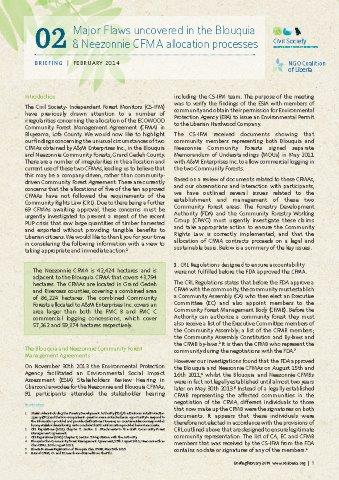 The brief highlights our findings concerning the unusual circumstances of two Community Forestry Managment Agreements (CFMAs) obtained by A&M Enterprises Inc., in the Blouquia and Neezonnie Community Forests, Grand Gedeh County, Liberia. There are a number of irregularities in the allocation and
current use of these two CFMAs, leading us to believe that this may be a company-driven, rather than community-driven Community Forest Agreement.

There are currently concerns that the allocations of five of the ten approved CFMAs have not followed the requirements of the Community Rights Law (CRL). Due to there being a further 69 CFMAs awaiting approval, these concerns must be urgently investigated to prevent a repeat of the recent PUP crisis that saw large quantities of timber harvested and exported without providing tangible benefits to Liberian citizens. We show: