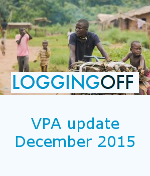 Twice a year, LoggingOff and Fern publish a Forest Watch special VPA update, which provides a roundup of developments across countries involved in VPA processes, from a civil society perspective. This edition is from December 2015.

Looking for an older VPA update?