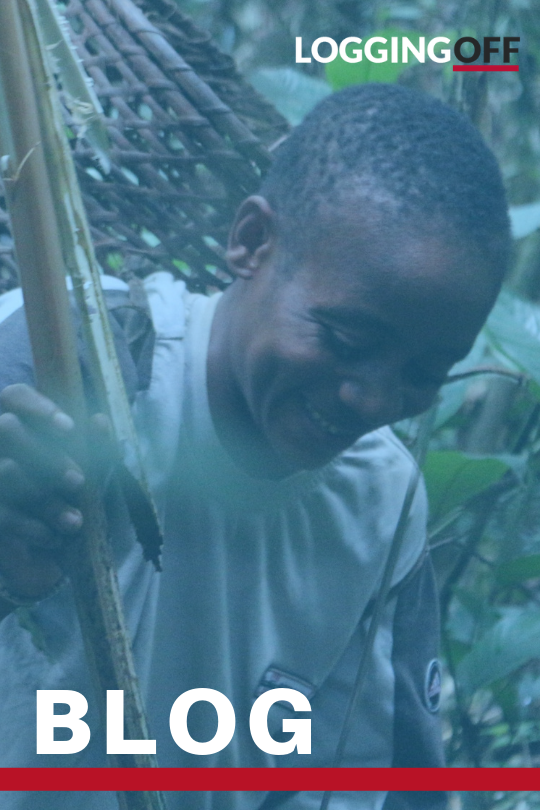 How it can support forest peoples, wildlife and the climate

From 2016–2019, Fern was involved in an ambitious project to advance community forestry called ‘NGO collaboration for equitable and sustainable community livelihoods in the Congo Basin forests’.

Marie-Ange Kalenga and Indra van Gisbergen reflect on what has been achieved, Fern’s specific role and what should happen next.

“If local and indigenous communities in the Congo Basin are enabled to manage their forests, they can help restore forests, conserve biodiversity, combat illegal logging, address climate change and secure sustainable livelihoods.”

This, in essence, was the main goal behind the project developed by a vibrant consortium of partners and led by the International Institute for Environment and Development (IIED). The consortium included Client Earth, Fern, Forest Peoples Programme, Rainforest Foundation UK, Tropenbos International and Well Grounded.

Staying within our niche and geographical expertise, Fern’s main responsibility was to increase political support for the development of community forestry, through research, pilots, advocacy and awareness raising. We worked to support partners in Cameroon, Central African Republic and the Republic of Congo, and engaged with policy makers and journalists in the EU and across the Congo Basin.

Community forestry in the Congo Basin

For Fern, community forestry means giving communities control over the forest resources they depend on for their survival, so they can manage them responsibly and inclusively.

In regions like the Congo Basin, communities have protected forests for generations, but they are now being pushed out of their ancestral lands. The causes are mining and increasing demand for wood and commodities such as palm oil, rubber and cocoa, notably for the European Union and China.

This scramble for forests has meant that vast tracts of land have been given to foreign companies or elites and taken from local and indigenous communities.

For it to be truly inclusive, community forestry also needs to pay more attention to the role of women. Our report Community forestry: Opportunity or mirage for women in the Congo Basin? found that women play an important role in forest resource management and conservation due to their dependence on forest resources for subsistence (fuelwood, plants, fruits, herbal medicine among others) and income. Yet, they continue to face discrimination when it comes to decisions about forests. More must be done to improve legislation and strengthen women’s participation in local governance to ensure community forestry benefits everyone.

Since the start of the CoNGOs project, lessons about what works and recommendations on what should be done have been shared between policy makers, civil society groups and forest communities in all Congo Basin countries and as a result, communities are becoming aware of their rights, and involved in forest management decisions.

This dialogue between policy makers and civil society culminated at the 2017 Meeting of Parties of the Congo Basin Forest Partnership (CBFP) in Douala, Cameroon, attended by several EU Member States including Belgium, France, and Germany, where Fern organised a side event on inclusive forest management in the Congo Basin. The event sparked considerable interest and an agreement that no community should be left behind.

This was an essential meeting as it allowed us to take lessons from Cameroon (a community forestry pioneer) and share them with the wider region. This wider learning was also achieved with the production of videos such as “Community forests in Cameroon: what have we learnt so far?” which looked at the problems as well as the successes achieved in Cameroon.

In November 2018, the Vice-President of the European Parliament Heidi Hautala co-hosted an event with Fern which allowed dialogue between EU institutions, Member States, tropical forested countries and civil society on what the new EU Multi-Annual Financial Framework can do to enhance rural livelihoods in the Congo Basin rainforests. As a result, she became a supporter of communities’ involvement in forest management and we hope to continue working on this issue with the new Parliament when it is elected.

Other notable champions that have come forward during the life of the project are the Minister of Forest Economy in the Republic of Congo, Rosalie Matondo who has become an ambassador of participatory forestry (including community forestry) for Central Africa. She has visited neighbouring countries to communicate the importance of both community forestry and strengthening community rights over forest resources.

The emergence of these champions is important for communicating the benefits of community forestry, strengthening dialogue between government and communities, and ultimately sustaining the momentum around participatory management of forests. Thanks to CoNGOs’ awareness raising, in the Central African Republic (CAR) there is, for example, a growing understanding within the Bantu and indigenous communities who sometimes have diverging views over forests, of the importance of working together and improving governance so that forest management is done jointly and in the interest of all. The project also enabled local and indigenous communities in CAR to participate directly in VPA meetings and express their needs, the rights violations they suffer and the community forestry model that would allow them to improve their living conditions.

Community forestry advocates such as Philomène Biya, National Coordinator of Congo’s Réseau Femmes Africaines pour le Développement Durable explained why such work is important. In all of the countries, communities are closely linked to forest ecosystems as they depend on them for food, habitat, medicines, and cultural and social rights.

Denying them access and control over forests is depriving them of the fundamental right to exist. Whereas when they are given strong rights over forests they have been shown to protect and preserve them, thereby benefiting biodiversity and the climate.

“Communities need to gain back the rights to their forests to achieve stronger livelihoods and improve the health of the planet”.

In Cameroon, the Centre for Environmental Development (CED) worked with communities in the villages of Nomedjoh and Nkolenyeng in the South East to develop a revised simple management plan in a participatory and inclusive way reflecting community needs and aspirations. The participatory process was captured in a guide which is now used by communities across the country who are interested in establishing sustainable community forestry. In Nomedjoh, the Ministry of Forests’ approval of their management plan has empowered a community to keep their forest standing while carrying out non-logging activities for the next five years.

As for the Republic of Congo, there has been an ‘in principle’ agreement to create pilot community forests in the Sangha region, where people will implement forestry that meets their needs and aspirations.

Our awareness raising and advocacy work was supported by videos such as:

Thanks to our fruitful collaboration, the European Commission has committed to supporting community forestry projects in the Congo Basin and there is even hope that community forestry will form a growing part of the implementation of the Forest Law Enforcement Governance and Trade (FLEGT) Voluntary Partnership Agreements (VPA) in the Congo Basin. The European Parliament has also become a more forceful supporter of forests and communities. Its ground-breaking report on natural resource management, the case of forests asks for stronger participation of local communities in forest management.

Fern and its local partners are motivated to continue supporting community forestry, even after the completion of the CoNGOs project, to help get their voices heard.

Fern will continue to work with DFID and other donors to promote community forestry and foster dialogue between civil society, national governments and the EU. We hope to garner support for the Brazzaville Roadmap for more effective participatory forestry in Central Africa which we helped develop together with our local partners and the UN Food and Agricultural Organisation (FAO). The roadmap paves the way for more resilient forests and communities in the Congo Basin and could be instrumental in ensuring that benefits from forestry reach the most vulnerable. Such work will also help us achieve international commitments such as the Paris Climate Agreement and the Sustainable Development Goals, but only if we can garner resources and political support.

When forests are at risk, so are the communities and the climate. If well implemented, community forestry can help protect them all.