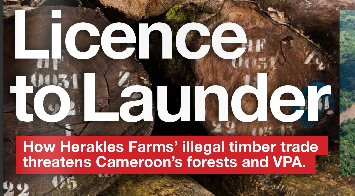 In a new report Licence to Launder Greenpeace reveals how the controversial US based company Herakles Farms has colluded with Cameroonian government officials to illegally obtain a permit to export timber harvested to establish a palm oil plantation in the South West region of the country.

The illegal deal undermines the Voluntary Partnership Agreement (VPA) concluded between Cameroon and the EU.

“Herakles Farms is a test case for the credibility of forest governance in the VPA era. The EU will have to show it is able to get its partner, Cameroon, to honour the partnership agreement,” Greenpeace says.

The case was brought to the attention of the Prosecutor in Cameroon, asking for the timber to be seized and that Herakles Farms and any government officials involved in the illegal allocation of the permit are held accountable.