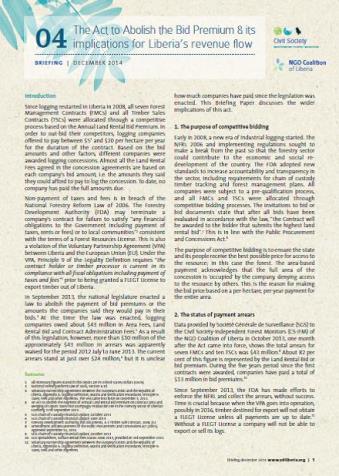 Since logging restarted in Liberia in 2008, permits have been allocated through a competitive process based on the Annual Land Rental Bid Premium. In
order to out-bid their competitors, logging companies offered to pay between $51 and $20 per hectare per year for the duration of the contract, i.e. the amounts they said they could afford to pay to log the concession. To date, no company has paid the full amounts due.

Approximately $10 million of Land Rental Bid Premium for the period 2012 July to June 2013 has not been collected; and just under $200 million has been
waived for the remainder of the 20 years on the bigger concessions. These amounts represent critical revenue that could be applied to Liberia’s dysfunctional health care system, and the education sector to address the chronic lack of educational materials for rural schools.

The law that abolishes the bid premium lacks implementing regulations despite being in force for nine months. Contract holders that are failing to pay their tax arrears, in spite of the generous amounts that have already been waived, are in serious breach of the terms of their contracts. The government’s failure to enforce the fiscal provisions of logging contracts, is not only depriving the country of much needed revenue, it also deprives affected communities of their 30 per cent share of the Land Rental Fees.