Ghana is the first country in Africa to have a fully implemented VPA, which entered into force on 1 December 2009. Civil society has used the process to highlight and move towards resolving anomalies in forest law, and to bring difficult issues of tenure to the table. What remains now is for the independent assessment team, contracted in mid-2018, to be mobilised. Ghana has declared themselves ready for this assessment to commence and once this process starts, are hopeful that a decision on readiness for licensing will be reached before the end of 2019.

Ghana has around 2.6 million hectares of forest reserves dedicated to timber production, and an additional 2 million hectares of crop land that also produce timber. The country also has 500 000 hectares of unreserved forests. The forest sector is the fourth largest contributor to Ghana’s GDP. 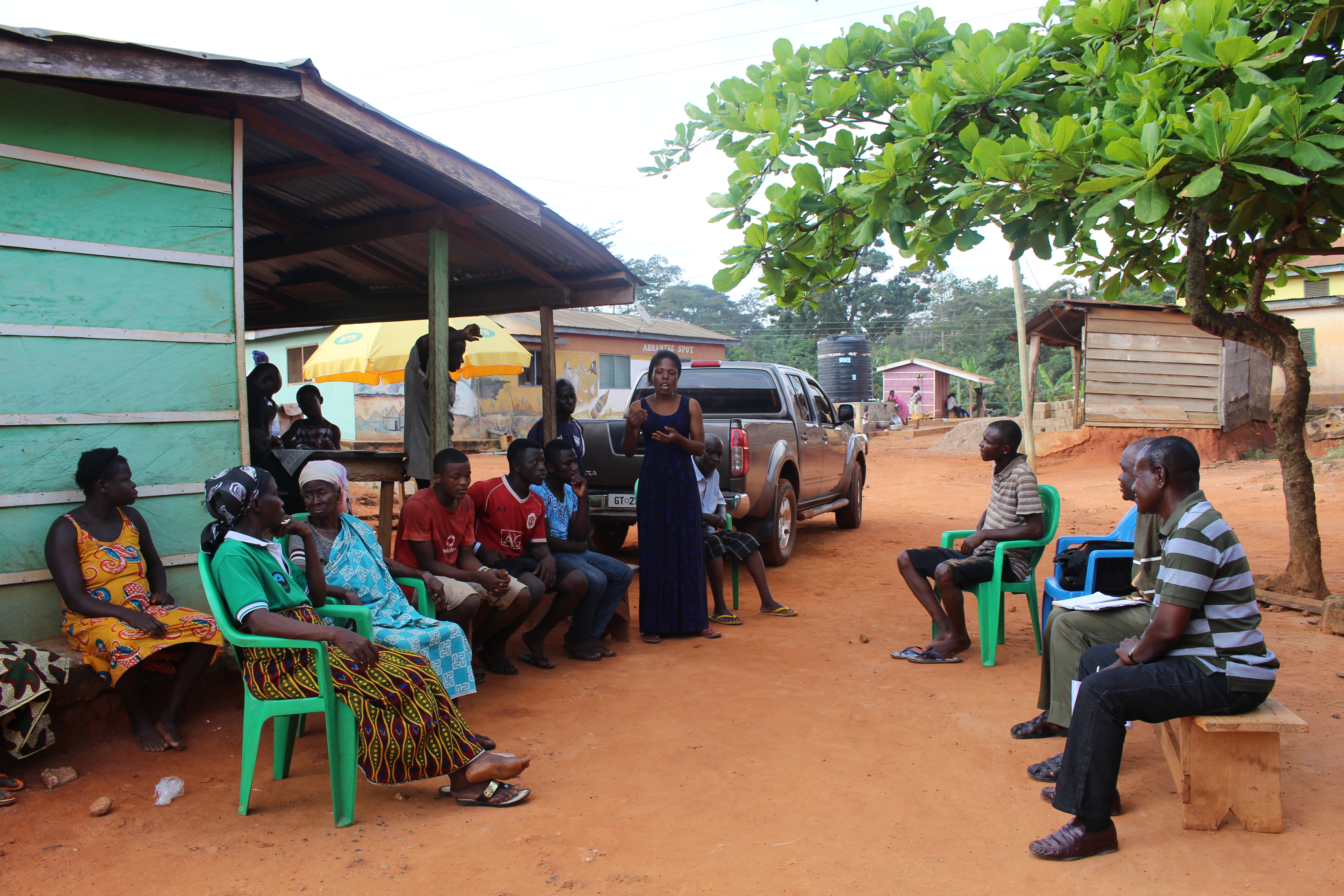 Ghana remains on the brink of becoming the second country to issue FLEGT licences, as it has been for some time now.

The second and final joint assessment of Ghana’s Legality Assurance System (GhLAS) started in February 2019 and is still in progress. A second field mission in July 2019, led to recommendations that would need to be addressed before Ghana could be considered ready for licensing. The Forestry Commission have expressed optimism that these issues could be dealt with promptly, and a final mission of the assessment team – hopefully confirming that no outstanding issues remain – is anticipated for early 2020.

One significant issue, conversion of extant leases into Timber Use Contracts (TUCs), must be finalised before FLEGT licensing is given a green light: more than 100 applications have been received from industry and are at the final stages of processing. The last, difficult hurdle to be cleared in the conversion process is parliamentary ratification, which is beyond the control of Ghana’s Forestry Commission (FC) and Ministry of Land and Natural Resources (MLNR). There is no specific time frame for Parliament to ratify TUCs, so this process must be well managed. The longer it takes, the longer timber companies will have to wait before receiving FLEGT licences for timber coming from the converted TUCs. CSOs remain willing to work with the FC and MLNR to engage Parliament in achieving speedy ratification of the converted leases.

Currently, 63 Forest Management Plans, required by the VPA process, covering 63 production forest reserves, qualify for FLEGT licences. Other forest reserves need forest management plans as a matter of urgency to qualify for logging and FLEGT licences. The issue of rosewood logging in Ghana is also in the news. Following an EIA publication about illegal rosewood logging in Ghana and allegations of corruption and abuse of Convention on the International Trade in Endangered Species (CITES) certificates, the Ministry of Lands and Natural Resources commissioned a committee to investigate. The committee were expected to report within a matter of weeks but were granted an extension to consider EIA’s material. CSOs had a representative on this committee and expect the final report to be shared. Once the findings have been made public, CSOs are committed to closely monitoring implementation of the recommendations.

Stakeholder representation and participation within the FLEGT VPA process remains strong. Ghana can boast of stakeholder-led decision-making processes in the forest sector (as opposed to Government-led decision making). The inclusive FLEGT process has encouraged a spill-over effect elsewhere: REDD+ and Cocoa Forest Initiative are learning from the VPA’s multi-stakeholder process, and the Forestry Commission has been prominent in encouraging this to happen.

In September 2019, Fern organised an EU policy tour for CSOs from VPA countries. In addition to CSOs, the Ghana team included stakeholders from the Ministry of Lands and Natural Resources, the

Forestry Commission and the timber industry, in order to provide the opportunity for all stakeholders to be part discussions with the EU, Member States and the EU Timber Federation.

During the tour, Ghana learned that most Member States (outside of the UK and Luxembourg) are not giving FLEGT licenses due recognition within their public procurement policies. Member State Officials said they believe that FLEGT licenced timber does not address sustainability standards but that Forestry Stewardship Council (FSC) timber does. CSOs can emphatically say that the FLEGT standard includes many sustainability requirements and that FLEGT is mandatory at the national level and not voluntary at the concessional level. Therefore, FLEGT is much more valuable to avoid deforestation and degradation. 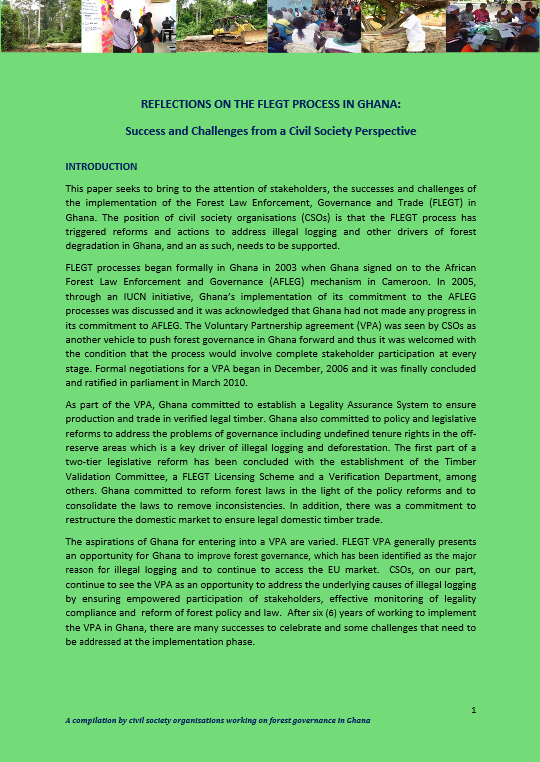 Civil society reflections on the process of FLEGT/VPA in Ghana

In 2015 civil society in Ghana published an assessment of the FLEGT VPA process in the country, with a focus on implementation. 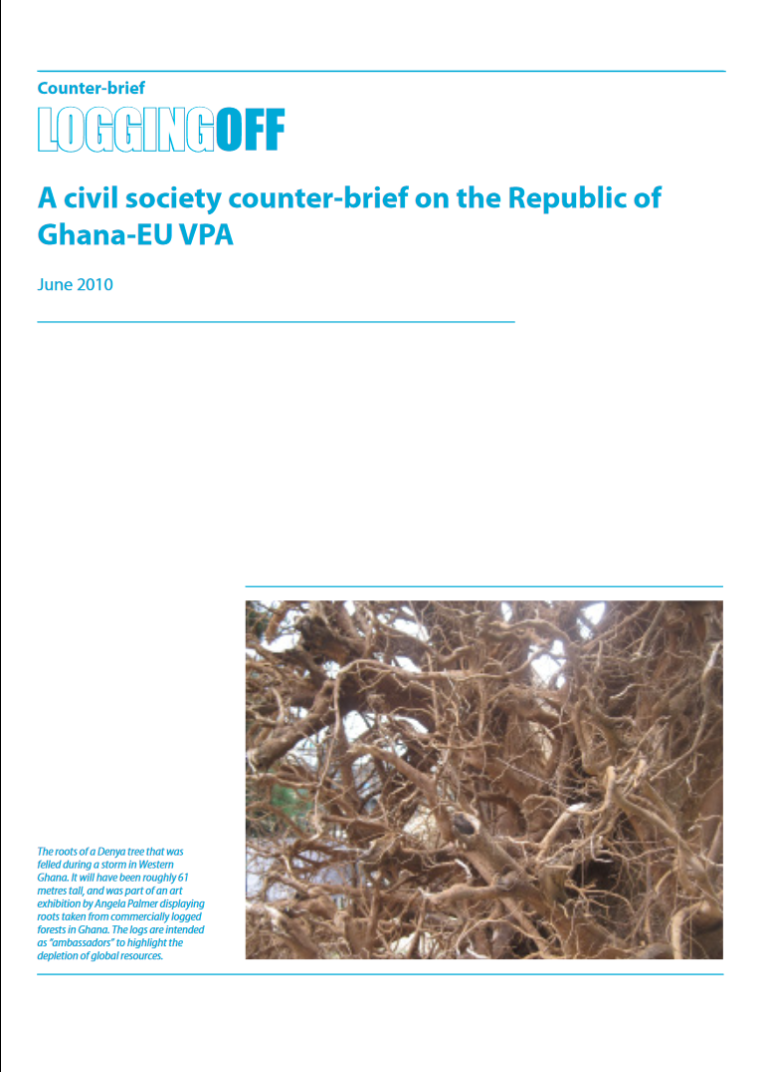 A civil society counter-brief published when negotiations were concluded in 2010 provides a more detailed assessment of the negotiation process. 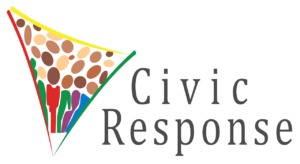 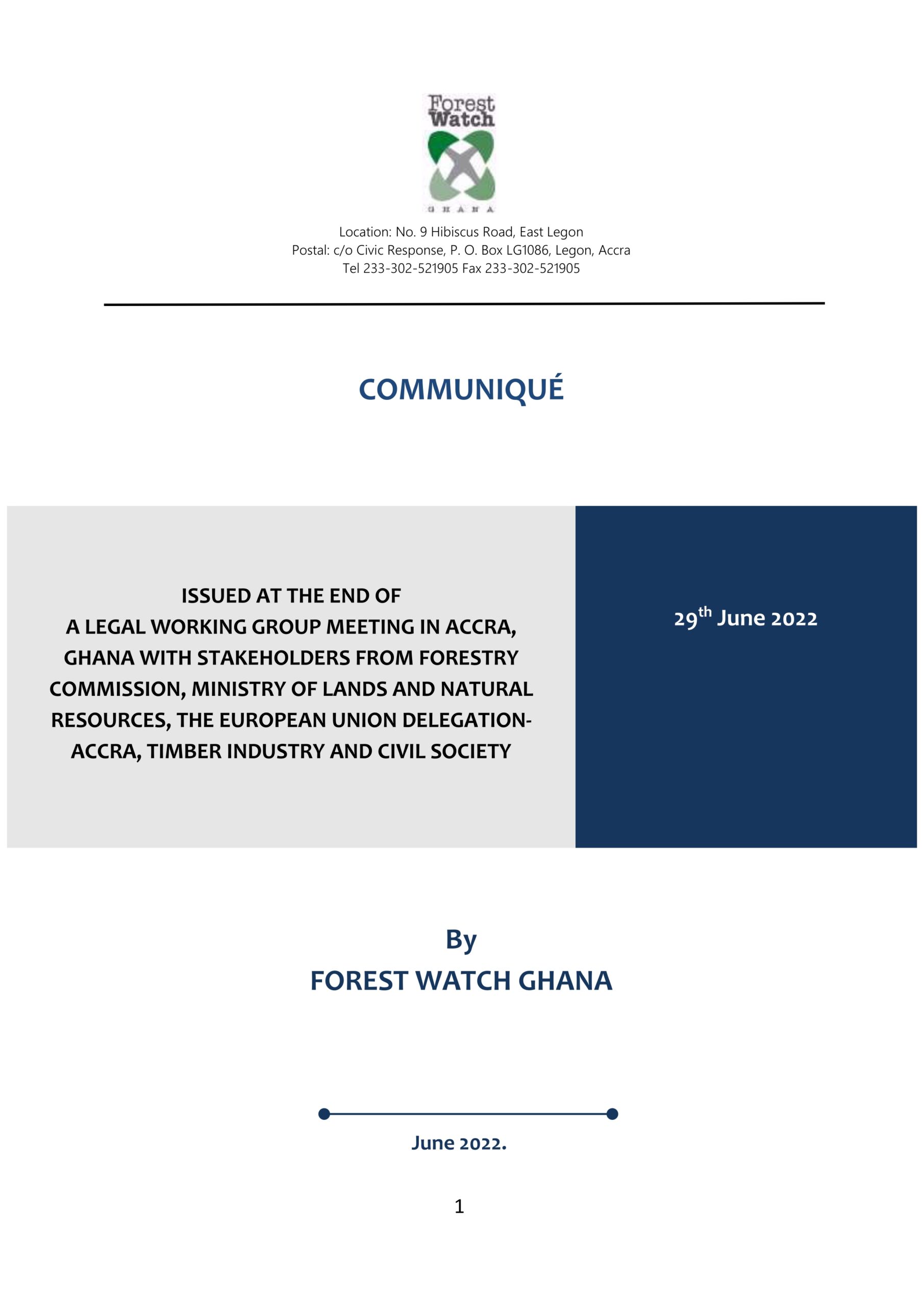 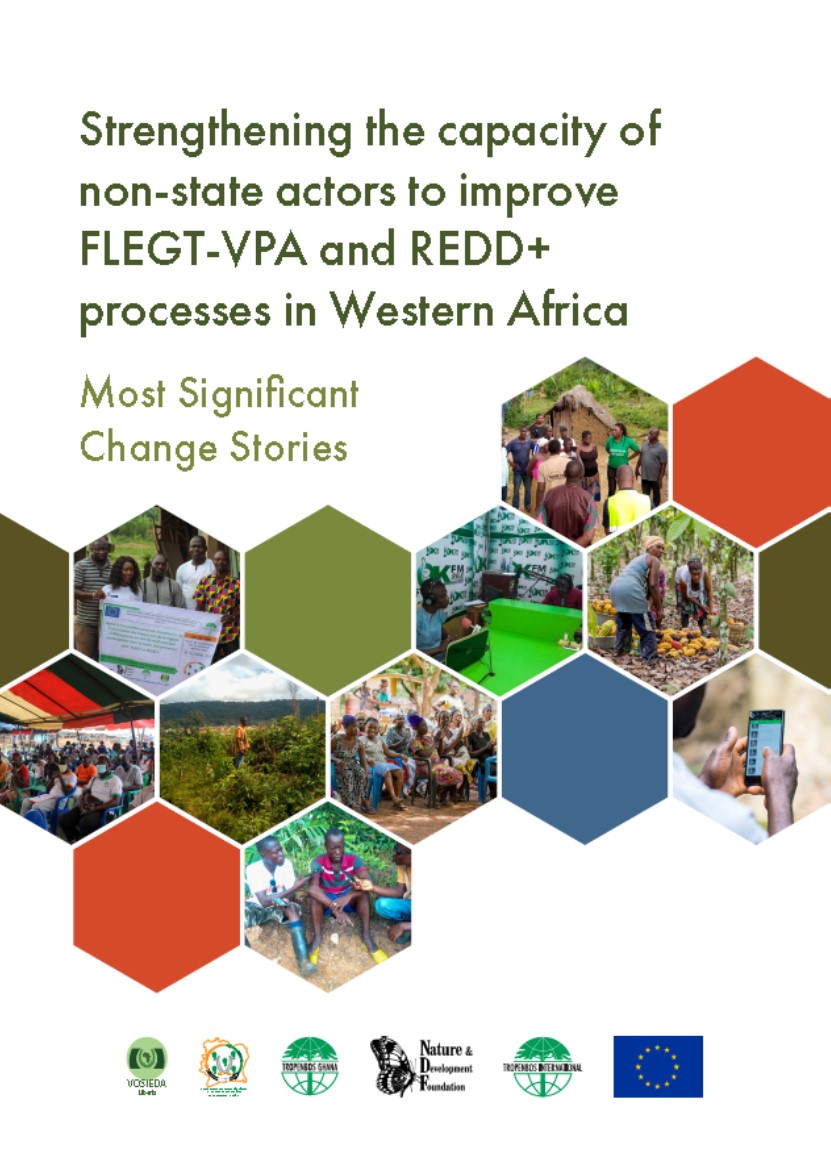 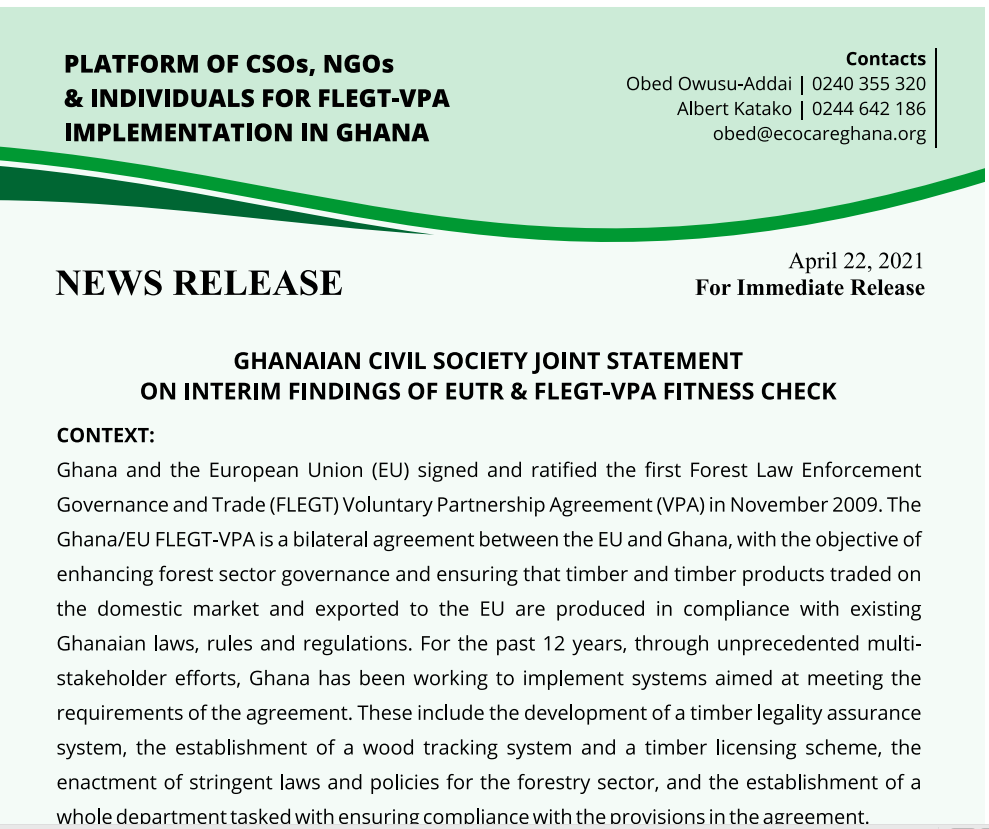