Central African Republic started VPA negotiations in 2009. The aim of the VPA is to improve forest sector governance by clarifying and simplifying management rules, ensuring increased transparency and use of public information, and respecting the rights of indigenous peoples and local resources. The VPA entered into force on 1 July 2012.

The Central African Republic (CAR) will enter an intense electoral period in 2020 – 21 that could have an important impact, good or bad. Many aspiring politicians are linked to armed groups with volatile positions toward the peace agreement signed in February 2019. The outgoing president will need to ensure that the elections can take place, while at the same time trying to deliver on commitments to pacify the country and improve governance in the natural resource sectors. Impunity for armed group leaders remains the norm, prompting many CSOs to call for further support for the Special Criminal Court created in 2015, and inaugurated late 2018, which still faces serious financial and technical challenges.

Ordinary citizens are still waiting for their lives to improve, and many of those who fled the country in the aftermath of the 2013 military coup are anxious to return. The local forest communities who have been particularly affected have yet to see the tangible benefits of unrelenting forest exploitation. The extension of government presence – very weak in some forest areas – would be important to boost the VPA process and ensure that public officials and logging companies are held to account for the management of the country’s forests. Russia’s growing role as a military advisor

to the CAR government has raised concern. It is increasingly clear that Russian businesses are engaged in diamond mining, and possibly logging, and these activities must be better scrutinised by public oversight bodies, so that they do not further disrupt already fragile governance reforms.

Despite their eagerness to see faster VPA progress, government and CSO stakeholders are worried that the lack of financial resources and donor support is slowing national momentum. At a recent meeting, all stakeholders agreed urgent priorities to revitalise the dormant VPA roadmap and lift the suspension of the financial agreement with the EU. CSOs are particularly anxious for the government to adopt the forest policy document and fix significant incoherencies in forest legislation that hamper full implementation of community forestry and more secure land and resources rights for communities and Indigenous groups.

A shred of hope remains. Forest authorities, local communities and the public at large are supportive of CSO efforts to end impunity. In particular, the independent forest-monitoring work, led by Centre pour l’Information Environnementale et le Développement Durable (CIEDD) on behalf of the platform members of the Gestion Durable des Ressources Naturelles et de l’Environnement (GDRNE), is bearing fruit: in July 2019 the government decided to suspend two dormant logging permits belonging to Ngotto and SCAD, and to reintegrate them into the state permanent forest domain. It will be important to ensure that the government follows due process when re-awarding these permits and that it respects its commitment to support community forestry projects in the Ngotto forest.

Government commitment to support stronger community engagement in the VPA notwithstanding, forest dwellers and Indigenous groups remain marginalised from decision-making processes. They blame the government for giving away their land to foreign companies, for not allocating parcels of land to the community and for forest destruction in dedicated community areas. They are therefore anxious to establish community forests and have asked that funds for climate and Reduced Emissions from Deforestation and Degradation (REDD+) be channelled to them.

Communities lack information about their rights and how they can benefit from progressive legislation, as well as about how they can involve themselves in climate action. Forest dwellers and Indigenous Peoples therefore cannot assert their rights or claim what is owed to them without adequate external support.

Accountability regarding the REDD+ process is slow but may eventually reinforce the VPA objectives. Through the Central African Forest Initiative (CAFI), stakeholders consultations on the Development of the National Framework of Investment (CNI) REDD+ mechanism were organised during the year. The CNI REDD+ is a tool for coordinating financing related to sustainable land and forest management, and for mobilising additional financing. Government and civil society identified and discussed several national measures to address deforestation and degradation during the 2020 – 25 period at an August workshop, including land-use planning; tenure; environmental impact studies on agriculture, mining, forestry, wood energy; and financial resources needed. CSOs hope that the CNI REDD + will help CAR to reach key development and forest governance objectives. These developments are a step toward consolidating CAFI support and ensuring that CAR can soon sign an agreement with the CAFI Board that will benefit its forests and people.

Local CSOs continue to be side-lined from climate action. The government delegation to COP25 had no civil society representatives. Important decisions will once again be taken without citizens being heard. This despite GDRNE’s work to improve countries’ efforts to tackle the impact of climate change, notably through monitoring and shaping the Nationally Determined Contributions (NDCs) so they can also be a tool to strengthen community resilience and halt forest destruction.

On a more personal note, in a ceremony on 30 November 2019, Fern’s partner Guy Julien N’Dakouzou was honored as a knight of the Order of Central African Merit (Chevalier de l’Ordre de

la reconnaissance centrafricaine), for his distinguished service to civil society and to his country through GDRNE and CIEDD. Heartfelt congratulations!

A brief history of VPA so far, from a civil society perspective

The local civil society platform is the Plateforme pour la Gestion Durable des Ressources Naturelles et de l’Environnement, (GDRNE). The GDRNE platform is an important driving force for the VPA. They work on important issues such as community consultation, compensation for damage and the role of civil society versus the forest administration in monitoring law enforcement. They also train communities in how to denounce illegalities.

GDRNE is looking at civil society’s role in forest monitoring how to ensure direct participation of community and indigenous people representatives in the VPA structures. 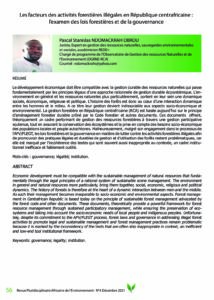 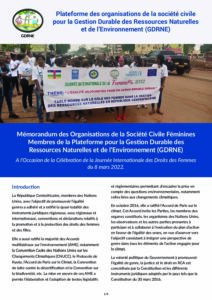 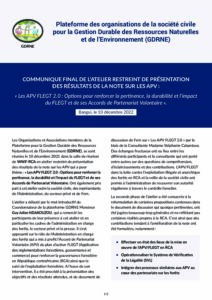